In my last post, I talked about the “magic number”—10,000 hours, the amount of dedicated practice time that it requires to become a master at a certain skill.  I reference the fact that as it stands currently, the average gamer will have 10,000 hours of gaming experience under his belt by age 21.  We are all, in fact, experts at gaming.  But what does being an expert gamer actually teach me?

Learning With Your Hands

In the comments on the last post, my father reminded me of a special we both saw which talked about laparoscopic surgery.  Laparoscopic surgery is a form of surgical procedure in which rather than slicing open the patient completely, the surgeon makes several small, nickel-sized incisions and inserts a tiny camera underneath the patients skin.  He then uses these complicated tools as his “hands” to perform surgery—including cutting, cauterizing, and stitching.  It’s much less invasive than traditional surgery, and the recovery time is much quicker.  It was of special interest to the two of us at the time, since my father had just undergone a laparoscopic procedure in his shoulder.

I imagine most of you have guessed the punchline.  The special indicated that surgeons who play video games have a higher success rate at performing laparoscopic surgery than surgeons who didn’t play regularly.  And we’re not just talking about a small increase here—we’re talking about performing surgery 27% faster, and with 37% fewer errors. That’s a tremendous difference when we’re talking about errors in surgery.  With numbers like that, wouldn’t you want to know you were being operated on by a gamer?

If you think about it, the connection between the experience of gaming and the experience of performing laparoscopic surgery is not a hard one to draw.  Laparoscopy involves using complicated tools to make fine, careful movements, and your only guide as to how you’re doing is—you guessed it—an image on a video screen.  I imagine it surprises no one that these are skills that you can develop by playing a lot of video games.  Only the staunchest anti-video game activists would ever argue that you can’t learn hand-eye coordination from a video game.  But can games teach us more than that?

Learning With Your Heart

Some time ago I read an article on Wired which you may have read also—it made the rounds on a lot of WoW related blogs.  The article was titled You Play World of Warcraft? You’re Hired!

This article is packed FULL of choice quotes, but let me reproduce the most important one here:

In this way, the process of becoming an effective World of Warcraft guild master amounts to a total-immersion course in leadership. A guild is a collection of players who come together to share knowledge, resources, and manpower. To run a large one, a guild master must be adept at many skills: attracting, evaluating, and recruiting new members; creating apprenticeship programs; orchestrating group strategy; and adjudicating disputes. Guilds routinely splinter over petty squabbles and other basic failures of management; the master must resolve them without losing valuable members, who can easily quit and join a rival guild. Never mind the virtual surroundings; these conditions provide real-world training a manager can apply directly in the workplace.

I ran a World of Warcraft guild myself, for a while—a small one, back in The Burning Crusade.  We never got further than Karazhan, and eventually we dissolved into a larger raiding guild; my WoW playing these days is much more low-pressure.  But that brief time, along with my experience as an officer in previous guilds, prepared me better for the workplace than any previous job I had ever had.

Or to put it in more absolute terms: Being a WoW guildmaster is better “management experience” than any non-management job.

Everyone is familiar with the old catch-22 of the working world: you can’t get hired until you have experience, and  you can’t get experience until you get hired.  I daresay that if the people who do the hiring can learn to recognize it, this could present a very real solution to this age-old problem.

Learning With Your Head

At GDC I was afforded the opportunity to have dinner with the author of Lost Garden, one of my favorite gaming blogs ever.  One of the things he mentioned at dinner was his recent creation of a game called Ribbon Hero.  Danc has written a post explaining it here, but as before I’d like to reproduce a relevant quote:

Ribbon Hero, in part, was born from a speech I gave back in October 2007 on applying the design lessons of Super Mario Bros. to application design. I made the following bet:

Not only can you make a game out of the activity, but you can turn tasks traditionally seen as a rote or frustrating into compelling experiences that users find delightful.

Danc also posted the slides from the original speech, which you can download in PDF format.  Danc puts together great slides, so I recommend these highly.

The fact is, genuinely powerful computer applications are incredibly complicated.  At one point I went to school to learn how to use Pro Tools, and the teachers there had all been working as professionals in the recording industry for years—and yet I still managed to show my teacher a useful Pro Tools shortcut he didn’t know about.  The level of complexity in an app like Photoshop is unbelievable, and let’s be honest—the manuals aren’t doing anyone any favors.  Pro Tools for Dummies is 720 pages long.

But if you can make it into a game, I can learn it.  Not only can I learn it, but I can learn it quickly and permanently—in a way that I retain over the long term—and I will have fun doing it.  And as Danc explains in the slides linked above, it’s not even that difficult.  It all hinges on the idea of exploratory learning. 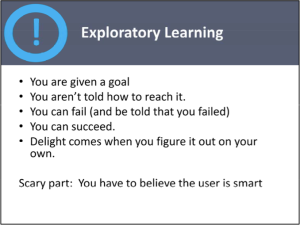 The modern conception of user interface design centers around the concept that users are dumb.  The oft-repeated mantra is “Don’t make me think!” UIs are built around the idea that people are stupid.  As Danc writes, “Sit in on any usability test and your subjects will flail about, click on the wrong things and ignore most obvious visual cues. We assume that users are idiots because we see them behave like idiots whenever we test them.”

But users AREN’T idiots.  The level of skill involved in effectively organizing and defeating a high level raid in World of Warcraft are on par with the skills required to do high level photoshop work, or complicated audio editing in Pro Tools.  And yet I know 10 or 15 people who can effectively execute a high level raid in WoW, and only 2 or 3 who can do pro audio editing, and 2 or 3 who know their way around Photoshop—because unlike WoW, I can’t learn Pro Tools or Photoshop as a game.

But…what if I could?

The Power of Games

Cracked posted an article a few days ago, entitled 5 Creepy Ways Video Games Are Trying To Get You Addicted.  Danc puts a more positive spin on the same concept when he says, “It turns out that games are carefully tuned machines that hack into human being’s most fundamental learning processes. Games are exercises in applied psychology at a level far more nuanced than your typical application.”  David Wong from Cracked writes about how these powers can be used for evil.  But Jane McGonigal from TED talks to us about how they can be used for good.

So the big question: We can use the principles of game design to do more than entertain.  How are we going to use them to educate, to train, to build social and emotional skills, and to make the world a better place?

9 thoughts on “Learning the Game of Life”