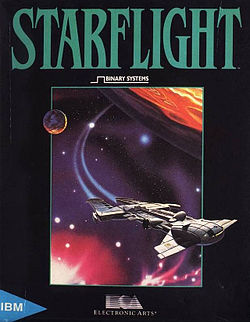 So the good folks at LemonAmiga.com have a manual on file for Starflight, which I have appropriated for my usage and read through in an embarrassed flurry of activity. In the process I have learned a number of interesting things.

Starflight begins in the year 4619, on a planet called Arth. This is an isolated colony in a backwoods corner of the galaxy, that until recently had not developed interstellar flight technology. The catalyst that sets the events of the game in motion is the discovery of an underground network of tunnels, originally dug by the original colonists of Earth.

The implication is that hundreds, if not thousands, of years ago, Earth was a thriving world controlled by an organization referred to as “The Old Empire”, made up of Humans, Velox, Thrynn, and Elowan living in harmony. At some point, forces hostile to the Empire did something which forced the inhabitants of Earth to evacuate in search of a new homeworld, eventually settling on Arth—where we now reside. It’s not known—to me, or to the characters in the game—why exactly the Empire had to leave Earth, and why the colonists of Arth were unable to maintain their level of technology.

In recent years, the Interstel Corporation has discovered this ancient cave network, and in the process been able to reverse-engineer some old-Earth technology. This breakthrough, combined with the discovery of a new, crystalline fuel source called “Endurium”, has allowed the Interstel Corporation to manufacture a new generation of faster-than-light capable starships. These ships have been provided to a number of exceptionally talented captains, along with the directive to explore the galaxy and see what we can see. The only trick, of course, being, that Interstel’s resources are not unlimited—so the initial stipend is all I have been provided, and the rest I will have to purchase myself.

Another interesting tidbit: this is not the first wave of interstellar explorers that Interstel has funded. Another group of 13 ships was sent on their way about five years ago, with a supply of about one year’s worth of fuel. Only 2 of them returned, one of which we are told about explicitly. This ship was captained primarily by a Thrynn crew, and in the process encountered a number of alien ships crewed by familiar races—specifically Thrynn and Elowan.

The manual takes this opportunity to inform us that the Thrynn and Elowan are historically sworn enemies of one another, and that if you encounter them in the wild, they will scan your ship to determine if a member of the opposing race is a part of your crew, and if so, they will open fire.

This sent me back to the “Personnel” section of the starport to kick Razz the Thrynn out of my crew. Elowan are flimsy, but they’re good at both communications AND medicine, while Thrynn are apparently only good at communications. Sorry Razz. I replace him with a friendly Elowan communications officer who I name Supox.

The backstory is interesting, though—it’s unusual to play a space exploration game where you actually know nothing about your surrounding environment before you begin exploring. And it turns out I didn’t spoil myself for much after all.

One more important note: I did manage to find a look-up table to represent the contents of the original manual’s copy-protection code wheel. This is how big the file is:

I have to enter a code from that table every time I want to leave the Starport. Not just a single unlock code, oh no. I’m breaking this baby out every time I go back to sell minerals.

Join us next time as we reflect on how we love games that play hard-to-get!

6 thoughts on “Starflight Part 3: What Should Probably Have Been Part 1”