One of the things I find the most interesting about this era of gaming is the clunky UIs.

The UI in Starflight is a nightmare by modern standards—almost by any standards, really. But the reason why it’s a nightmare is because to the developers of Starflight, the consistency of the game’s internal logic trumped any considerations of  usability.

This isn’t something that happens in modern games. For example, in the gap between Mass Effect 1 and 2, weapons shifted from a heat-based system (where weapons had unlimited ammunition, but needed brief breaks to keep from overheating) to a clip-based system where weapons needed to be reloaded after a certain number of shots. We’re expected to believe that in the 2 years before Mass Effect 2 took place, every single weapon in the galaxy was retrofitted to work on this new, modular, interchangeable system—never mind the fact that the 63-year old AK-47 is still one of the most commonly used weapons in the world today.

Now of course, no one thinks about this difficulty for too long. It doesn’t make a lot of sense, but we don’t care—because a reload-based clip system is more fun to play than the overheating-based system they originally designed, and because gameplay trumps world-building.

This is a standard of modern gaming—the quality of your gameplay is more important than the internal consistency of your game’s fictional universe. That’s fine, and in general I think it’s a good way for games to be. But every so often you have a hankering to play a game that’s like peeking through a window into an alternate universe, even if the window itself is smudgy and hard to see through.

There are a number of modern independent titles whose success can be attributed to this phenomenon—Dwarf Fortress, which gives us an impossibly detailed 3D world only visible through ASCII, or Ancient Domains of Mystery, a roguelike RPG which actually forces you to de-equip your gloves before it allows you to equip a ring. Even Minecraft has an inkling of it. But to really see it, you need to go back to the old days—and Starflight is a perfect example. 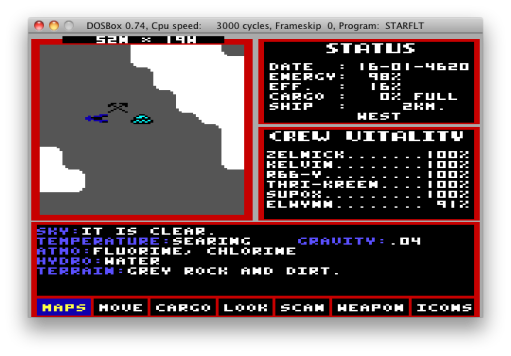 This is the planetary exploration screen in Starflight. In the center is my planetary rover, to the left (in blue) is my ship, and above it is a node of mineral resources that I can gather for later sale.

A number of things stand out to me here, but the most dramatic is that the planetary surface is represented purely symbolically. No attempt is made to actually show you visually what the planet genuinely looks like—systems at the time didn’t have the graphical capability. The terrain is only indicated using grey and white squares, each individual square representing a kilometer. Those colors don’t represent ice or snow, they represent altitude—lighter colors are higher. Minerals are denoted by a symbol, not by any attempt to actually display a vein of chromium. If you want some idea of what the planet’s surface actually LOOKS like, you need to look at the bottom of the screen for a text description.

And yet, with this simple text description. the planet itself comes to life. I can look through the smudgy window of my planetary terrain vehicle and see the barren, grey rock and dirt surface, and the clear sky.

This isn’t the only occasion where the UI is difficult to navigate, but consistent with itself. This is the screen the game shows you when you try to land on a planet:

The landing screen above will give you a rough idea of the topology of the planet, but the image to the right is actually a Mercator projection of a spherical planet surface. Later games, like Star Control 2, used a simple square map that wrapped around to the opposite side if you went too far, like a Pac-Man level. Not so Starflight—they’re willing to accept all of the bizarre interface issues caused by trying to represent a spherical surface on a 2-dimensional plane, because it’s more important to them that their universe be consistent than accessible.

Likewise, if you look here:

…you can see the interface that I use to maneuver from planet to planet within the system. Note that each of the menu items is broken down by the actual crew officer who is responsible for that particular task. This makes a lot of sense, to be sure—if you actually have a crew of five to help you play the game. In terms of actual gameplay, though, it often means that the different functions which you normally use together—or at the same time—actually are buried in several entirely different nested menus.

For example, if I wanted to leave the starport, travel to another nearby planet and land, I would select the “Captain” menu and choose “Launch,” so as to give the order to leave the starport. But the captain doesn’t actually pilot the ship—that responsibility lies with the navigator. So you have to exit the “Captain” menu and select the “Navigator” menu, and then choose “Maneuver” to travel to the other planet. Once you arrive, you have to exit the “Navigator” menu and select “Captain” again to give the order to land, and disembark the ship.

All this is frustrating to be sure, but at the same time it’s weirdly charming. The idea of having to select my different crew members in each step reminds me that I DO have crew members, and subtly suggests the interplay between captain and crew as we traverse the solar system. By forcing me to use my imagination to picture the planet’s surface (especially in light of the recent landing of the Mars Rover Curiosity), I wind up conjuring images more fantastic than any the game could have shown me. And the fact that I have to enter a security code every time I leave the goddamn starport becomes…well, let’s say “bearable.”

Join us next time as we explore exotic new worlds and exploit their mineral resources for personal gain!

4 thoughts on “Starflight Part 4: Through A Glass, Darkly”